Every morning, Bryan Maness, owner of Ozark Mountain Biscuit Co., and his culinary team scratch up freshly made biscuits, by hand, the old-fashioned way.

Its recipes are based on the food Bryan grew up eating as a child in the Missouri Ozarks.

“My grandmother Ramona Sue and great-grandmother Jettie Louise sure knew how to put a spread out on the table for our family gatherings,” he said. “Locally sourced wasn’t a trend back then; it was the only option in the rural Ozarks.”

Bryan’s ingenious idea to put his family table on wheels began at Columbia Farmer Market. Market patrons were the first to taste an Ozark Mountain Biscuit, Bryan reminisced. “We gave away free samples of Biscuits and Gravy at the market before launching our food truck in 2013.”

“I sell at the farmers market to interact directly with the wonderful market patrons. It is a joy to be a part of such a vibrant community of folks seeking out local, delicious food options,” he said. “We all benefit when folks shop locally. It is so vital to keep our money in our community. ”

Specializing in scratch-made biscuits and Southern sides using locally sourced ingredients has been a hit at the market and beyond. In addition to operating a food truck in Columbia and his booth at Columbia Farmers Market, the biscuit company travels during summer months operating outdoor kitchens at some of the biggest music festivals in the nation.

In addition to setting up a booth at the farmers market, Bryan operates a weekly food truck around town. The schedule is made weeks in advance, but sometimes must change due to the weather or other unforeseen events.

“The food truck business is dynamic and constantly changing,” said Bryan who recommended patrons track down the biscuit truck daily at ozarkmountainbiscuits.com, on Instagram @Ozark_Biscuits, or Facebook @OzarkBiscuits.

With a goal of bringing scratch-made biscuits to Columbia seven days a week, Bryan hopes to open a brick-and-mortar eatery in the future. In the meantime, frozen Take 'n Bake Biscuits are available at local grocery stores and the farmers market.

Stop by the Ozark Mountain booth and see which Southern specialties Bryan and his team are slinging this week.

"It is a joy to be a part of such a vibrant community of folks seeking out local, delicious food options.”
-Bryan Maness, Ozark Mountain Biscuit Co. 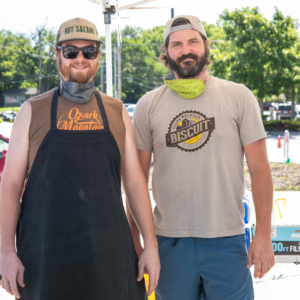 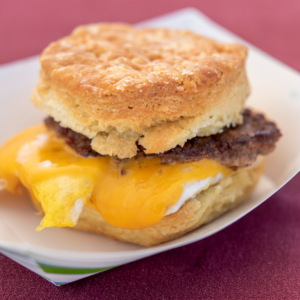 In the South, pimento cheese spread is a picnic basket staple.
get the recipe
HomeAbout UsLearnOur BlogShop
Vendor ListMarket DetailsEvent CalendarContact Us