Oscar J. Wilcox comes from a family of cooks. He grew up in Seattle, Washington, where, he said, family holidays and reunions always involved a lot of good food. “Cooking is real big in my family; everyone has a specialty dish,” he said. Among Wilcox’s favorite holiday dishes is his mom’s sweet potato pie. When Wilcox moved to Missouri to study business and marketing at the University of Missouri, he missed that pie, especially at Thanksgiving.

After some experimenting in the kitchen, and gleaning a few tips from his mom, “I came close to a pie that tasted like my mom’s.” Before long, he was sharing them with his friends. “I was giving away a lot of sweet potato pies, until a friend told me I should start selling them.” So in 2014, he sold an array of pies—sweet potato among them—at the Fayette and Moberly farmers markets. 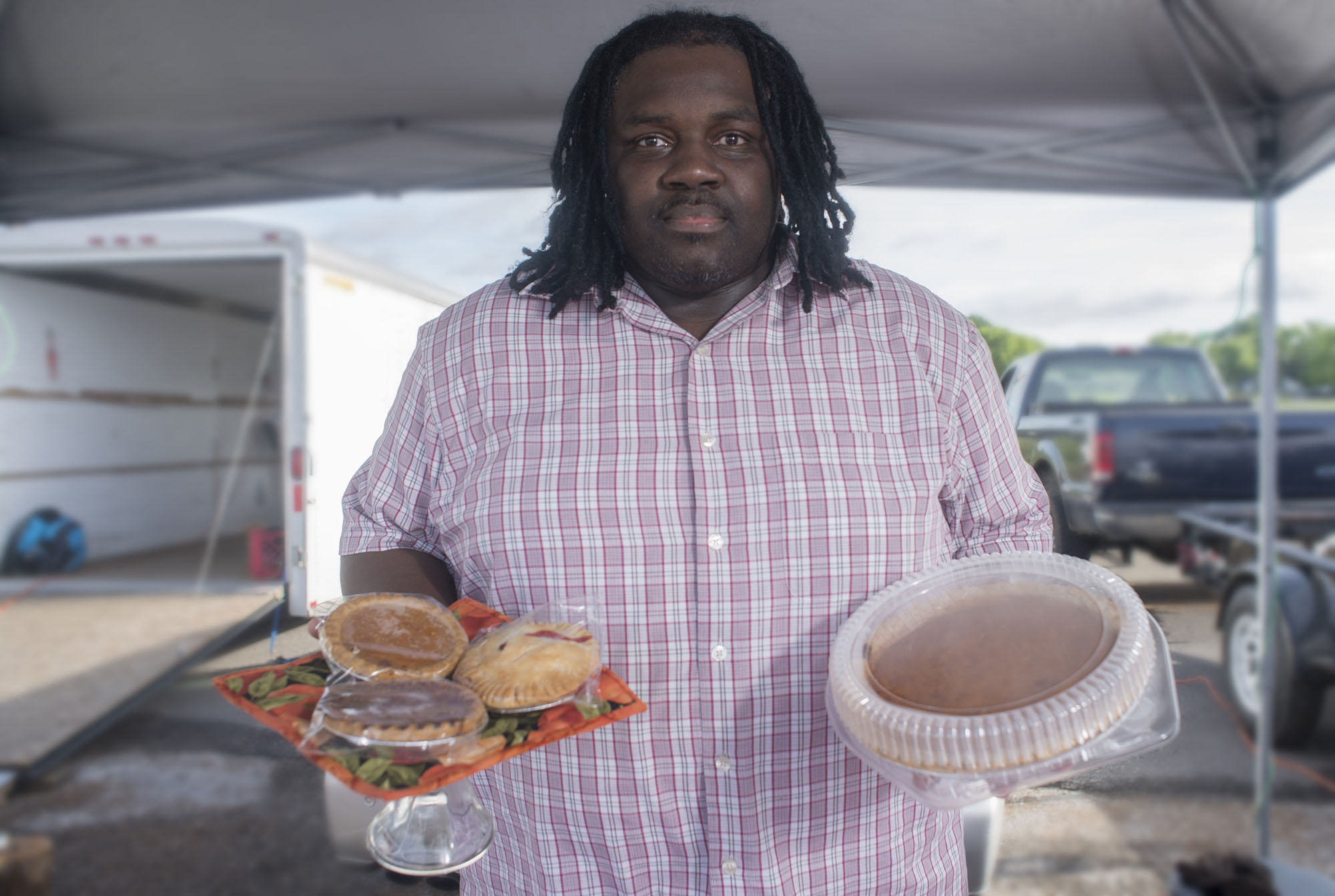 This will be the third year he has brought Oscar Jay’s Gourmet Pies to the summer and winter Columbia Farmers Market. Every week, he bakes his pies in a commercial kitchen at the Columbia Senior Center. “I also make 2-, 3-, and 4-inch personal pies. People pick them up and eat them while they walk through the market,” he said.

“I sell at the farmers market because I have a good artisan product, and selling at the market is a great way to get my product to the local community. I enjoy cooking and baking, but I also like seeing the look on people’s faces when they try my pies,” he said.

Aside from his popular sweet potato, he offers a “fusion” pecan and sweet potato pie that garners many compliments. His other products include bread pudding, chocolate-pecan pie, peach pie, strawberry pie, cherry pie, lemon meringue pie, and various fruit and berry cobblers. “I make pies from pretty much any fruit that’s in season.”

At home in Columbia, Wilcox also loves to cook Southern and Creole dishes. “Mom’s family is from Texas,” and she was influenced by Louisiana cuisine, he said. “That is where the Southern influence comes from.” Though Oscar Jay’s is a “one-man operation,” he said, “when my mother comes to town, she helps me in the kitchen.”

“I sell at the farmers market because I have a good artisan product, and selling at the market is a great way to get my product to the local community."
-Oscar J. Wilcox 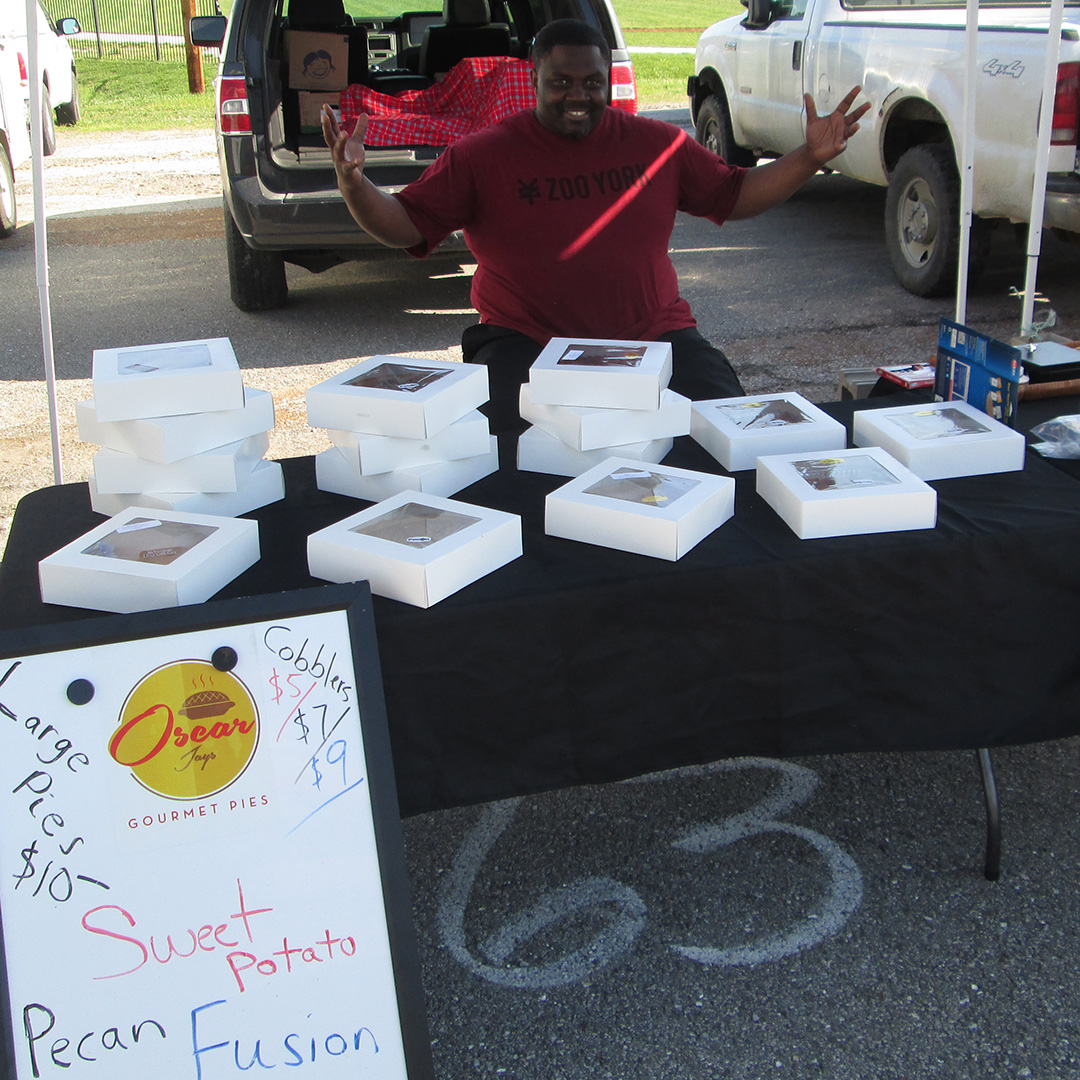 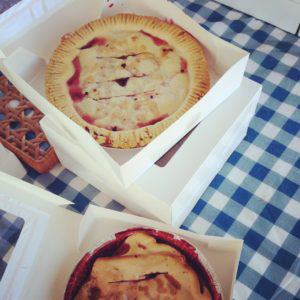 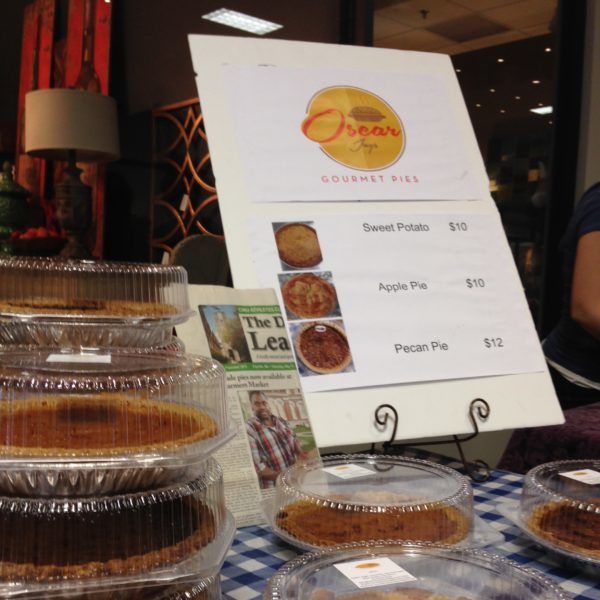 Oscar J. Wilcox shared a recipe for chocolate pecan pie. He also sells his special version of this pie at the Columbia Farmers Market.
get the recipe
HomeAbout UsLearnOur BlogShop
Vendor ListMarket DetailsEvent CalendarContact Us